The ecophysiology of the deep-water macroalga Anotrichium crinitum (Kützing) Baldock 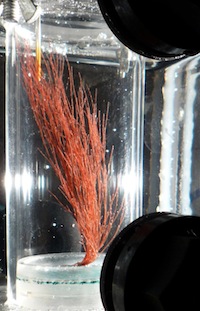 A. crinitum sealed in an acrylic chamber for photosynthesis versus irradiance experiments.

In many coastal areas increased anthropogenic influence has had a negative impact on the penetration of light through the water column, which may lead to increased periods of light limitation for subtidal macroalgae. This study focused on the filamentous red macroalga Anotrichium crinitum growing at 10 m depth near the Huriawa Peninsula on the wave-exposed North Otago coast, in the south of New Zealand’s South Island. The aim of this thesis was to examine the physiological acclimation of A. crinitum to ecologically relevant light levels in order to determine if it is living on the edge of its ability to photosynthesise and grow.

The light environment around the Huriawa Peninsula is highly variable and detrimentally affected by high winds and increased flow from the nearby Waikouaiti River. During winter, or following extreme weather events, light may be extremely low for periods lasting from days to weeks. Anotrichium crinitum is an important component of these deep-water (low light) communities and as anthropogenically- driven change continues to alter the subtidal light availability in coastal systems, it is important to establish the potential effects on the species living at or near the maximum depth limit for growth.

Seasonal changes in Anotrichium crinitum physiology appear to driven by light availability and not, as is the case with many other macroalgae, seawater nitrogen concentrations. Data presented here show that A. crinitum has photosynthetic characteristics of a highly shade acclimated organism, with some of the lowest reported quantum requirements for net photosynthesis and growth. The photosynthetic strategy of A. crinitum appears to be to retain a high photosynthetic efficiency throughout the year, so that it is able to exploit low numbers of quanta and maximise photosynthetic carbon fixation when light is available. Although A. crinitum show no sign of being nitrogen limited in situ, it is unable to utilise nitrate, a more abundant, but energetically more expensive form of nitrogen. In the laboratory, A. crinitum will take up and utilise nitrate if supplied exclusively with it. However it does not store this nitrogen in this inorganic form and the nitrate assimilation enzyme nitrate reductase (NR) appears to reach maximal levels of activity at relatively low daily quantum doses.

In contrast, Anotrichium crinitum has a high affinity for ammonium, a potentially less abundant, but energetically less expensive, form of nitrogen. In the laboratory, A. crinitum grows around 31% faster when supplied with ammonium versus nitrate and it is suggested that preferential use of this form of nitrogen may support the growth and survival of A. crinitum in situ. Clearly, A. crinitum is well acclimated to growth under low irradiances, but even under present-day conditions the growth window for A. crinitum is relatively narrow, with conservative estimates suggesting that 30 % and 50 % of days are insufficient to support net biomass accumulation. It seems probable that A. crinitum is living on the edge of its ability to photosynthesise and grow and reductions in light will not only restrict the ability of A. crinitum to survive in deep water, but these reductions may have wider implications for coastal food webs and ecosystem functioning.